Electrodes for titration and cables

Concentration and density in liquids 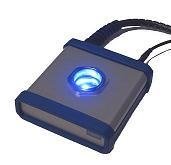 The ModuLight is a programmable light source that has been specifically designed to investigate photo-electrical devices, such as solar cells. The add-on module will operate in combination with the IviumStat, CompactStat, sModule, or the selected Vertex instruments through the peripheral I/O-port.

The ModuLight, by default, contains 7 LEDs with wavelengths ranging from 460-740 nm. On request LEDs can be exchanged for others from the same product range.

During operation an LED can be programmatically selected. The sinewave generator of the potentiostat can then be used to modulate the light intensity of the LED with a frequency of  10µHz to 2MHz. Using the extensive Solar cell applications that are included in the Ivium software allow a full characterization of the solar cell. The functionality includes E/I curves as function of the light intensity, IMVS/IMPS, and solar cell modelling resulting in all characteristic values of the studied object.

We protect your data

We protect your data